Protection and restoration of northern Kamares beach in Sifnos

"Ormos Kamares" has an entrance opening of 1,800 meters. The northern and southern parts consist of rocky shore 2,300 and 1,300 meters respectively. The eastern part consists of a sandy beach about 600 meters long. The project is located on the northeast coast of Kamares Bay, more specifically opposite the existing port of Kamares, as shown in the image below. 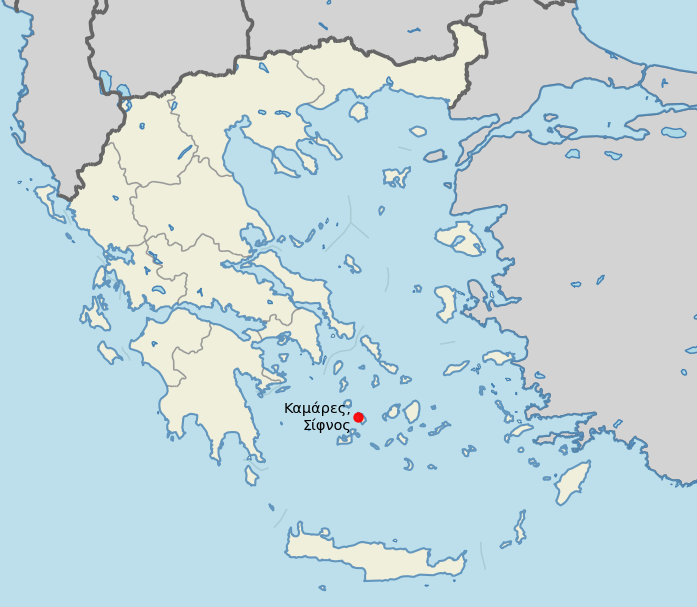 The South Aegean Prefecture commissioned CNWAY, following a tender, the study for the expansion of the main port in Kamares bay of Sifnos. Its scope included a sediment transport study in support of the harbour works. The comission order for the coastal engineering study was issued in August 2015. Its purpose is to investigate the impact of the proposed harbour layout on the bay shoreline, as well as to address the erosion problem, the north shore of the bay of Kamares has been facing over time.

Following the reconnaissance the team decided to take hard measures to restore the erosion of the north coast. Taking into account the morphology of the bay and the nature and causes of the problem, the constructions of parallel breakwaters was chosen as the most appropriate solution. Considering that a large amount of sediment of the beach is now trapped at the lee of the port works, the expected sediment redistribution towards the northern end will be done with sediment located in the middle of the beach and the sea bed in front of it. To reduce the impact of a new shoreline balance, it was suggested that the breakwater be low crested.

Two alternative arrangements for the low crested breakwater were considered. Layout 2 the breakwater is 70 meters long and its end is 30 meters from the north shore of the bay, while in solution 3 it is 100 meters long and connects to the shore. The opening of 30 meters is the only difference between the alternatives. They are constructed parallel to the beach and at a distance of about 200m from it, with a crest level of -0.3m from the mean sea level and a width of 4.0m.

The suitability of the solution was checked with the TMS (Telemac-Mascaret System) numerical model of coastal sediment transport, which is based on the coupling of the individual wave propagation model (TOMAWAC), wave current calculation (TELEMAC2D) and stereo transfer (SISYPHE). A total of 4 layouts were evaluated, the existing and three proposed, two of which involved the construction of a breakwater. The choice of the optimal solution was made by observing the amount of sediment transported along the coastline.

Based on the site reconnaissance and the numerical simulation results, it emerged that construction of the proposed port works (layout 1) are not expected to impact the sediment balance of the coastal zone. Among the solutions considered to mitigate the erosion of the north shore, the detached 70 meter long breakwater (layout 2) is preferable as it retains 30% more sediment and costs 40% less than the 100 meter long breakwater (layout 3).